It was the summer of 1994 that gave a whole new perspective for me as a musician. A new chapter started less than a year prior to that, when I left Israel to come and study with Leon Fleisher at the Peabody conservatory of music in Baltimore, MD. So much had happened during the course of that year, and yet something very special was left for the summer, when I was accepted to attend the Steans Institute of the Ravinia Festival in Highland Park, IL not too far from Chicago.

"I hope your experience here will be an everlasting increase of awareness" asserted Mr. Fleisher to a group of young musicians at a festival, me being one of them. My experience that summer of 1994 at the Steans was not so much to do with awareness. It was to do with awakening!

I was never a big fan of competitions. It gave me neither motivation nor inspiration to go and practice. Yet competitions seem to have been the excuse for countless of hours of practice to so many young pianists, seeking that elusive thing we call "career".  The Steans institute took me on a different path, one which was much healthier in my humble opinion.

Five weeks of intense work on solo repertoire as well as chamber music literature - one nourishes as well as supports the other. It is interconnected, interwoven. The Piano faculty consisted of Leon Fleisher, Menachem Pressler, Christoph Eschenbach, and Claude Frank to name just a few. The String faculty was of equal merit with Miriam Fried, David Geringas, Lynn Harrell, Kim Kashkashian, Paul Biss and many more.

Miriam Fried the leader of the program with her uncompromising musicianship and sense of integrity has created an environment where individualism and creativity flourishes. I will always remember the many hours of extra work that Paul Biss spent with Laura, Inna and me on Schubert's E flat major trio, helping us achieve a performance that opened our eyes (and ears) to the infinite beauty of Schubert and of chamber music. I remember how Lynn Harrell, while coaching Colin, Si-Fei, Inna and me the Brahms c minor quartet joined us in the last movement. His playing with us amounted to a tsunami wave which I had never known existed. For a moment I can also close my eyes and feel the aura in the room when Claude Frank spoke about and played parts of Beethoven's sonata op. 90, or feel the exhaustion after working nearly six hours with Christoph Eschenbach on Beethoven's Les Adieux sonata.

After that summer I decided that at the end of each year I would go to a different summer festival. I went to Aspen, Tanglewood, Verbier, Marlboro and Santa Fe. All have their special virtues. For me though, it was the Steans Institute that turned on the light and showed the way that was best for me.

Sometimes a lightening strikes twice in one place. I was struck for the first time in the summer of 1994. Then again when Miriam Fried called me to join the Piano faculty.  For the past three years now I have been coming to teach / coach at the Steans. To share and pass on what was given to me here in this special place more than a decade ago, together with other experiences each with its own nuances, is what we are meant to do. It is a privilege. To see how the Steans continues to grow and inspire young musicians while still keeping its core values is one of the joys in my professional life. 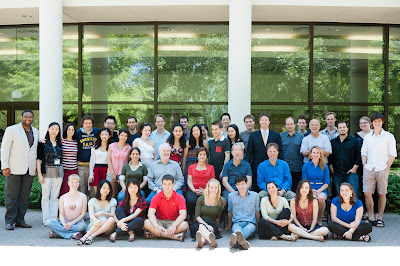 Posted by Alon Goldstein at 5:30 AM

Alon, Love to read your writing. Thanx for sharing, Hannah