Preceding the performance of Poulenc’s concerto for two pianos in Savannah GA, I addressed the audience with the following short introduction:

"Good evening ladies and gentlemen. I wanted to share with you a few thoughts, perhaps insights into this unique work which you are about to hear - the Concerto in d minor for two pianos by Francis Poulenc.

At the end of the 19th century the musical scene in Europe was dominated by the music of Wagner and Strauss. This rich, lush, self-indulgent, self-oriented music completely overwhelmed and overshadowed anything in its way. Composers such as Stravinsky, Ravel and Debussy had to look elsewhere for their sources of inspiration. They tried to break away and go as far as possible from this intoxicating, somewhat "dangerous" music. Stravinsky started to incorporate African rhythms into his compositions. Ravel looked to Persia and being fascinated by the new cultural possibilities wrote Scheherazade. Debussy went even further, off the coast of Indonesia to the island of Java and brought back the sounds of Gamelan music - an orchestra of bells. The search for new sounds - exoticism - was central especially to the French composers.

Francis Poulenc was born into this atmosphere in 1899. Absorbing these new waves and musical thoughts, he also raised an important question - whether music / art has to always represent something serious, above, high, elitist. Can music, at times, be just plain silly. This concerto is in d minor. The two most famous d minor concerti are those by Mozart and Brahms. Both are profound masterpieces with monumental as well as tragic substance. The piece which we are about to hear, although in the same key, is a complete antithesis to its predecessors. It might be looked at as a counter-reaction to everything that d minor represents.

In his pursuit of sounds and silliness Poulenc also asked the orchestra to get out of its comfort zone and be something else. Right at the opening pages of this magnificent work, the strings are being asked to sound like drums. In the middle section of the first movement, the wood winds and brass will produce hallowing, wining sounds resembling some creepy creatures. At the end of the first movement, one of my favorite places in the concerto, the two pianos need to create a gamelan orchestra of high-pitch bells while the principal cellist will be transformed into a glass-harmonica. Good luck with that…
This is music that combines buffoonery with brilliance; elements of fear with elements of flirt. It will make you love as well as laugh. It is sophisticated and surprising. It is very moving music, as well as movie music. Ladies and gentlemen, you are right! Combining all these things together might end up sounding more like one big cacophony than a piece of music. Well, we thank you for coming. We wish you good luck, and hope that you will enjoy this evening’s performance." 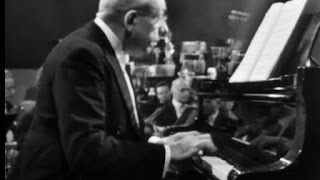 Posted by Alon Goldstein at 1:27 PM No comments:

Music is an art form that “happens” in the dimension of time. It is horizontal - starting at point A and ending after some time at point B, or perhaps Z. It has high points and low points, climaxes and moments of relaxation, drama, chaos, order, relief, triumph and so much more. When we make music we strive to tell a story and create these infinite array of emotions while keeping throughout a sense of movement, a sense of horizontality.

Piano is a strange instrument. We press keys down in a vertical movement in order to create something that is purely horizontal. We do not blow air into an instrument as with a wind instrument, or have the advantage of using a bow to create movement as with a string instrument. The piano has 88 evenly laid out keys which hit strings with hammers in order to create something which is anything but even or percussive.  Composers dealt with this “ethical” enigma when they wrote for the keyboard. One of the inspirations and aspirations for composers in reconciling this problem is to transform the piano into something else… an orchestra. The piano (after all) does have some advantages - the ability to deliver many notes at the same time, the ability to use different registers all at once, the enormous span, the different colors and so on.  Composers put this idea at the forefront, and in pursuing their goal turned the piano into an orchestra in astonishingly different ways.

J. S. Bach published his Italian Concerto in 1735 as part of what is known as “Clavierübung II” or “Keyboard practice book 2”. At age 50 Bach decided to publish a book consisting of only two works - The Overture in French Style and the Italian Concerto. Both pieces are studies in orchestral writing. While the Overture examines the dance genre, the Italian Concerto looks at the brilliant writing of the concerto style. A presenter once asked me upon seeing that I will be performing this piece, “who are you playing it with? which orchestra?” Not realizing this extraordinary work is played with one instrument. The essence of the concerto genre is the confrontation between the soloist and the orchestra. This creates a lot of the drama. This drama may be severely damaged if a conversation between two becomes a monologue of one! Bach created here the effect of an orchestra against a soloist by experimenting with textures, registers as well styles of writing. The first movement suggests the style of a violin concerto with virtuosic writing for the solo right hand. The second movement is a highly ornamented aria accompanied by a continuo bass. Though sounding quasi improvised, it is very meticulously written out. The third movement is a concerto grosso, or concerto for orchestra having all the voices in high speed participating as soloists as well as orchestra.

Almost 90 years separate Bach’s work, with one of Franz Schubert’s most monumental “orchestral” works - the Fantasy for solo piano in C major known was “The Wanderer”. Its dramatic power, bold formal structure, emotional range and conciseness, makes it one of the most revolutionary pieces in the Romantic era. The piece was shocking in the way it treated the piano. It influenced generations of composers such as Liszt (who orchestrated the piece) Mendelssohn, Chopin and others. A student played the piece for me once. His playing was extremely aggressive and percussive. When I suggested the idea of looking for an orchestral sound, he instantly agreed exclaiming “here we have the bells. and here are the drums, the gong, cymbals and so on.” I then suggested that this should not be a Stravinsky orchestra, but rather a similar orchestra to the one that performed a Schubert Symphony. The “Wanderer fantasy” is a grand symphonic work - The “modernity” of its use of the piano is truly revolutionary - Its exhaustive use of the sonorities of the instrument, its insistent use of broken octaves - suggesting string tremolo, the cascading full throttle octaves - perhaps a brass section, the broad rich texture - full tutti, the wide range of dynamics, the entire scope of the piece, all suggest the search for a multitude of forces that exist only within the orchestra. The piece was written in C major, the same key that Schubert later wrote his final symphony nicknamed “The Great”.

Moving forward to the world of Franz Liszt who wrote over 60 transcriptions, paraphrases and arrangements of operas from Mozart to Bellini, Verdi to Wagner. He made these for several reasons: Being a virtuoso pianist, it was a way to show-off his abilities and imagination also as a composer / improvisor. Secondly, it was an opportunity to bring this music to a wider audience at a time when not everyone was able to connect to YouTube… and Lastly and the most important reason in my opinion - these arrangements celebrated the instrument that had become so popular, so central during the first decades of the 19th century. To celebrate the piano as well as to challenge it - above all the sonorities which included dynamic range, articulation possibilities, note repetition and pedals. It is commonly thought that Chopin wrote “everything that was possible for the piano”. Well, in that case Liszt wrote everything that was NOT possible for the piano. This is not to say one is better than the other. It simply suggests that the things Liszt asked for from the piano were beyond what the instrument was “supposed” to do. LIszt’s arrangement of Wagner’s last scene from Tristan and Isolde is a wonderful example. Bringing to life Wagner’s epic orchestra - 100 string players, six harps, 12 horns and more - all captured within one single instrument is “mission impossible” or is it not?   It is fascinating the way Liszt creates the effects of a timpani drum-roll, string tremolo, harp arpeggios, and of course winds solos. The arrangement is full of imagination. At a certain point one forgets about the orchestra altogether and immerses himself in the toxic beauty of sound and color that comes out of the piano.

At the hight of Romanticism, from 1890 to the beginning of the 20th century, the music of Wagner and Strauss was so overpowering, so dominating that the composers that followed - Debussy, Ravel and Stravinsky - had to look anywhere but Germany to find their sources of inspiration. That went a long way in the areas of sound, texture, sonority and rhythm. There was a search for new colors - exoticism was central especially in the works of Claude Debussy. One of Debussy’s most enchanting piano works “Estampes” gets its inspiration from Gamelan music coming from the island of Java of the coast of Indonesia. This is an orchestra made up of almost entirely percussion instruments - clappers, rattles, a variety of gongs and bells producing timbres which were previously unknown to classical music. Debussy revolutionized our perception of the scale of dynamics, silences and articulation markings as means of expression. In this exploration he achieved a whole new range of orchestral colors within the piano. We might compare his revolution in that aspect to what Liszt had achieved a few decades before with his virtuosic demands on the piano . A short piano work called “D’un cahier d’esquisses is particularly interesting as it explores silences and sound in just as much intensity and consistency as it explores the moments of ecstasy and climaxes. One gets a sense of hallucination as if being catered for under a magical spell.

After WWII, the entire world was in a state of complete shock and lost hope. In the music world that manifested itself in the idea that we have to “start anew”. Composers began asking themselves whether a piece needed to have structure, melody, rhythm and so on. Furthermore, can structure be something different, new? The same question applies to melody and rhythm. What is a melody?  What is rhythm? Along these lines, the concept of whether instruments can produce different sounds was tested. Does an orchestra needs to sound like an orchestra?  Georgy Ligeti’s Musica Ricercata which was written between 1951 and 1953 examines the very foundation of such questions. Six movements from this collection were transcribed for a Wind quintet. Humor, wit, sarcasm, pain, songfulness, folklore and paying homage, are all played-with and ultimately given new meanings in what lay the foundation to post-modernism. One of the most important phenomenas that occur when we listen to music in general is “Expectations”. We expect a theme, we expect to feel, we expect to resolve tensions, we expect certain sounds. The idea of “expectations” is being put to the test and shaken to the core in this fascinating piece by Ligeti.

Throughout the centuries the Keyboard remained central in the creative lives of composers. Some wrote their new symphony first at the keyboard and then orchestrated it. Others wrote their new symphony FOR the keyboard, imagining the range of sound and color that an orchestra can produce within that enigmatic instrument. Some of the most fascinating pieces ever written were for the piano but with the full resources of an orchestra behind as the driving force.