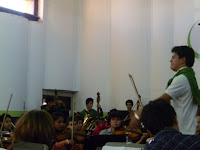 ...in a day filled with extraordinary highlights, there was still one moment that stood above others.

We had a Q & A session (the young orchestra members and I), and I was asked whether I have a favorite composer or favorite piece. Not an uncommon question for which my answer is that I spend countless number of hours with every piece before it gets to be presented on the stage, and I cannot go through such a process with a piece I would not consider as a favorite. In other words, I have no favorite piece or composer, but rather favorites!

To the principle cellist that answer did not suffice. Standing up, he asked me if I could play "something that I could identify myself with." Now that is different. With some hesitation I sat down and played the closing movement from Schumann's epic Fantasy Op. 17. 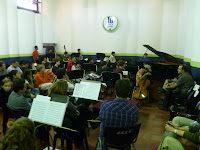 This thirteen minute slow pace meditation or perhaps a prayer, a farewell, is one of the most heartfelt pieces ever written. It goes straight into our innermost. It is music which expresses such solitude yet is all embracing. It is probably meant for just one person, whomever you want him to be.

After playing it, I turned to my fellow musicians and asked for the reason for choosing this piece. The answers kept pouring. 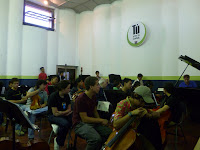 The two answers that I will never forget came from one orchestra member who thought that this music represented "the way I would like the world to be"; the second came from Bruno, their twenty-eight year old conductor who said that while I was playing, he saw the gates of heaven opening up and beaming light shined upon us all. This reminded me what Schumann said when writing this movement: that he had "a vision of Heaven with its angels in solemn troops and sweet societies, that sing, and singing in their glory move, and wipe the tears forever from our eyes.”
I could not agree more with all that I heard.

Shortly after, a group of about fifty people came in and formed a half-a-circle behind the orchestra. At first I was not sure where they came from or why they were here. All of a sudden they started to sing Handel a-cappella, and continued with all sorts of folk songs. 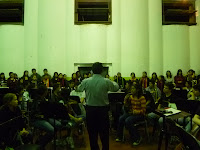 This afternoon started with one climax and gathered many more along the way: the choir of four-year-old's, the nine-year-old concert mistress, the instrument restoration shop, the ten-year-old conductor, the Schumann Fantasy, the a-cappella choir, and so much more. I saw a miracle in all its glory – a new reality. Can this be real or should I look at today's newspapers to find out what is real? I have no doubt that everyone around felt they were part of something special. Through the power of music they were able to get away each day from their reality if just for a moment, and build a new one, much more hopeful. 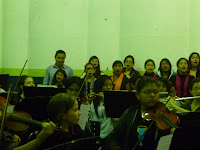 Many mornings I wake up and spend time with a composer that through the power of music he was aiming to build a more ideal world – Beethoven. I decided to end the visit with playing the Finale from Beethoven's Sonata "Appassionata".

The orchestra made me their first honorary member. I told them that the real honor would be that next time, rather than play for each other, let us play WITH each other.
After all, they showed me what togetherness is all about.

We miss you Alon!

Dear Alon,
Heard you last night at Peoples' Concert and indeed, the heavens opened up for me and my friends as well. I am a Buddhist and they do not believe in heaven, but you showed everyone what this heaven on earth can be.

You have a big heart and big intellect, and I thank you so much for following your path...and reminding us how lucky we are to be alive in this life of terrible beauty.