On performing Bartok's concerto no. 3 with the Rhode Island as well as the Fort Wayne Philharmonic Orchestras - February 28 and March 14, 2009.
In the midst of a February month dominated by playing four different concerti (Schumann, Brahms 1, Mendelssohn 1 and Bartok 3), I suddenly discovered something which at first seemed totally absurd - that Bartok has potentially more in common with Mozart than say Schumann or Brahms. To be more specific, I realized that by thinking in Mozartean terms I would reveal more of the mystery in this piece (Bartok 3), get closer to its core, its ultra sensitive quality, its unique intimacy.
As I walked on stage I saw a magnificent sight - a huge instrument comprised of nearly eighty musicians - string players, wood winds, brass and percussionists who were playing a wide range of instruments in all shapes and sizes. The stage was completely packed.

During the first run-through of the piece I recognized much more Stravinsky and Debussy in our playing than say Bach or Mozart. I believe there is a strong misconception of Bartok as being an aggressive, heavy-handed composer. I often hear his music being played loudly and with some brutality. In music history of the twentieth century, Stravinsky's use of the simplest rhythmic patterns being repeated, and elevated above melody is called "primitivism." We also use the same term when addressing Bartok's melodic lines which are derived from folk melodies and especially peasant songs from Hungary and the neighboring countries (Romania, Bulgaria). Yet, these melodies, simple as they may sound, use quarter tones in a melodic scale, which is far more elaborate than "our" major or minor scales. Their rhythmic ingenuity juxtaposes similar recognizable rhythmic patterns in a way that creates entirely different stresses and tensions within the phrase. So different than Stravinsky. Primitive would not be the word I would use. 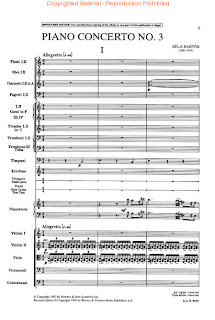 We begin again. This time I ask the orchestra to "Think Mozart". The scoring of the opening is so thin, so minimal - no tutti, just strings, timpani and piano. The very first notes, rather than create a Debussy-like murmur, I ask the strings for the precision and clarity that would characterize a Mozart accompaniment. The timpani should sound like as if it is playing "pizzicato." On top of that I could introduce my folkish dance. This intricate and very peculiar dance is deceptively simple. Its complexion is due to the displacements of strong beats and weak beats within the bars. It needs extreme attention to agogic, stresses and overall phrasing. A different kind of listening is asked for. Transparency is crucial. When this opening theme reaches its climax and brass instruments are added, it is still with the same sense of clarity and style that defines the classical era, rather than the full blown thick massive sound of late romanticism.

In the second theme, piano, strings, winds and percussion participate. Sounds big...? Well, "yes", however the result is quite 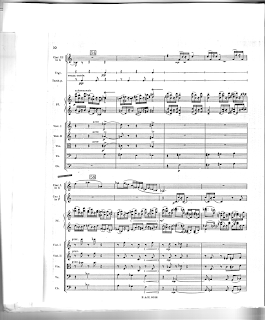 the opposite. In this subtle interplay between the various instruments, piano is the leading voice while the other
instruments add spices, colors and missing beats. The use of each instrument - triangle, side drum, horn, clarinet, violins is so economic, so sparse. What is even more fascinating is that to my ears, Bartok is asking the percussion instruments to sound like string pizzicato, the strings are asked to sound like wood-winds or alternatively like light percussion instruments (i.e. triangle), the wood-winds sound somewhat like a piano, and the piano... well, with music that has such purity and directness of expression, the piano needs to combine the clarity and precision of an early fortepiano with the infinite resources that the modern instrument can provide.
Let's think about that - asking a percussionist to sound like a wind player... or the latter to sound like a piano... This is a revolution to our common notions of sound. But that belongs to another entry.
Early in his life Bartok was most influenced by the composers he emerged from - Brahms, Liszt, Strauss. As he evolved, during the 1920s, Debussy and Stravinsky became a great source of inspiration. Now, late in his life (with the present piece), he is looking back to Mozart and even further... to Bach! It is in the first movement that I felt the greatest benefit in listening through Mozart "Ear-glasses." In the following movement, the slow second movement, an altogether different atmosphere is created. Its religious state of mind, its choral as well as polyphonic writing resurrect another very familiar figure, that of Johann Sebastian... Bartok.
Alon Goldstein
Posted by Alon Goldstein at 8:49 PM