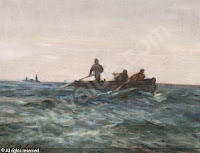 Thanks Alon for telling us stories, playing them as well as talking them. Listening to your words helps to see the notes you play. I love your stories, either way.
Missing you, Hannah

I thought your story was of a piece with Ravel's story. I know you said that it was not Ravel's story but I am thinking here of the name "Miroirs"(Reflections)here. Your story translated or fitted with Reflections because-and I am here drawing upon some obvious psychoanalytic concepts-there is this notion that the creation/dream of a demon or beast is a splitting of the self or a reflection of the part of a self that we fear or are threatened by or refuse to recognise or even wish to disown.It works well with children's narratives or narratives with children at the centre because I think children are made sensible of or very conscious of very early on about notions of good and evil. As an adult now when I reread children's stories I realize there is always such a dark note or subtext and it always makes me wonder why. I listened to Ravel's composition after reading your story,and its so chilling, in parts atleast. Anyway I should stop and I hope I havent ruined your story with all this(sorry if I did)..its a lovely piece and just invited interpretation. And by the way since I have written so much already I might as well say how wonderfully well you play..you are superb!Of course I have to confess that in my country we are bred on a very different tradition of classical music and so really I think I am quite ill-equipped to comment or maybe don't even have the right to do so but really enjoy your music immensely whatever little we understand. The blog is lovely too. I hope to see you perform live in some part of the world someday. Meanwhile all good wishes
Maitri