Two and a half years ago my manager Frank Salomon initiated the idea of commissioning a new piano concerto for me, and last week the premiere took place in Kansas City. Has it really been that long for the whole project, from its inception to the premiere? Well... Yes!

From the choice of Avner Dorman as the composer, to "seducing" the right conductor (Michael Stern) and his orchestra (KC Symphony), to raising the sufficient funds, etc etc - all went quite smoothly, and yet it took two and a half years! And what an experience it was - a week of discovery, and revelation, of witnessing the birth of a wonderful new piano concerto.

When I perform with an orchestra, whether Mozart or Beethoven, Schumann or Rachmaninov, the days of rehearsals are devoted to building the interpretation, the performance. We don't have to "worry" about the piece. It has already proven itself. It transcended time and place. It is settled. Our time is spent on making our understanding of the piece work.

When premiering a new piece, the center of our attention falls on helping the piece settle as a new entity. Similar to helping a new baby stand on his two feet, we help the piece stands on its 337,486... notes. Of course a good performance helps.

What was so revealing, so rewarding, intriguing, and interesting was to witness how through the course of the week a miracle - a new piece - is taking shape in front of our eyes (and ears). The "new" notes start to gravitate towards each other like magnets - one note equals one letter, together with another note... they become a syllable. Three notes - perhaps already a word. Four notes, then five, adding rhythm... we are on our way to making a sentence, a phrase. A few of these and we have a paragraph, then a page, a chapter, and before we know it, we have a whole story!

Lost Souls is very much "of our time" - Multiculturalism. It brings a spirit from the past into the present and examines what happens when it clashes with our age. As Michael Stern told the orchestra at one point: "think that you are sitting in the "Oak Room" in New York around a few Jazz players having a Martini with Rachmaninov..." Or as Michael McCurdy from Schirmer publications wrote that in this "globalized culture Art Tatum and Johann Sebastian Bach converse on the Ouija board of the 21st century."

Avner and I were contemplating about the reasons why in the last sixty years there has not been a piano concerto that entered the repertoire in a way that Bartok and Prokofiev have been. Is the genre obsolete? Is the content the problem? The composers? Do we need another piano concerto?

The answer is a resounding... No!
...and Yes!!
No, because the orchestra does all that it can to drive the spirit away at the end. But Yes, because indeed we have a new piano concerto which in time, I hope, will enter the repertoire. 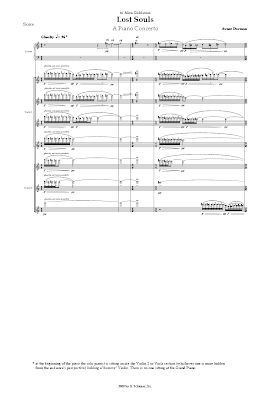 I am not the Father of this new concerto. That would be Avner.
I am also not the Son... would that be Michael?
How about the Holy Ghost....? I think that actually works perfectly with the content!

To understand that, though, as well as to read more from the composer and the press I suggest clicking on Lost Souls.

The Lost Souls will conjure again, this time with the Fairfax symphony on March 13, 2010.